In this post I’m going to show you how to store your kayak. In the last year my family has decided that kayaking is definitely for us. So much so that my wife and I decided to make the investment in everyone in the family owing our own kayaks, which for us means five kayaks. And while kayaks don’t weigh a lot, they can definitely eat up space quickly.

DID YOU KNOW: You can follow me on these social media platforms!

*I use affiliate links, please see details on my disclaimer.﻿

My primary objective with this project was to create a storage rack that allowed me to stack the kayaks up on the garage wall giving me a minimal footprint and to do it in a budget friendly way. The design I settled on used three 12’ 2x4s, four 10’ 2x4s and two 10’ 4x4s. That gave me almost the exact amount of material needed and I ended up with almost no waste.

I then needed to make some smaller pieces to use as cross braces and I cut these using my crosscut sled at the table saw. This could have been done at the miter saw too if you don’t have a table saw.

I find the crosscut sled to be easier and more accurate when making repeat cuts this small. I needed 30 of these little pieces in all.

And That’s it for the cutting on this project, all that’s left to do is assemble everything. I need to assemble ten support arms and to do this I placed two boards against one of the 4x4s like this.

I then put one of the cross brace pieces in the middle and clamped the whole thing to the 4×4.

Using 3 inch construction screws I fastened this together.

I then flipped the whole thing over and repeated this process on the other side.

Finally, I added one cross brace approximately in the middle. Doesn’t have to be exact, I just eyeballed it.

The idea here is the support arm will attach to the 4×4 like this and create a tight fit.

I’ll be able to fasten the support arms to the 4x4s on each side as well as in the middle using the cross brace.

I just continued on using this same method until I had 10 total support arms. Which looks something like this.

Now for the 4x4s I marked out screw locations at 2 ft intervals.

I then marked the center with a center punch.

I used a ¾” forstner bit to countersink a hole halfway through the 4×4.

And then used a ¼” drill bit to drill the rest of the way through.

I made use to knock out all the shavings for a nice clean hole.  I did this four times on each 4×4.

OK, over at the wall I marked out where I wanted my first 4×4 to go and made sure it was plumb.

Because I’m fastening this to a cinder block wall I used a hammer drill and masonry bit to drill these holes.

If this was going on a normal garage wall I would mark out where the studs were in the wall and fasten the 4x4s to those drilling the holes with a normal drill bit.

With one anchor in place I checked for plumb one more time with the level before drilling for my next anchor.

One tip I have for using these anchors is don’t over-drive them because you can strip out and ruin the hole.

Just drive the anchor until the 4×4 is securely fastened and doesn’t move.

I then marked out the location of the other 4×4 approximately 60” away.

My kayaks are about 10’ long and this will provide plenty of support without leaving too much space in the middle which could potentially cause the kayak to bow over time.

If you noticed I’m using treated 4x4s here and the only reason for that is my garage walls are 10’ high and I could only find treated 4x4s in that length. Most big box home centers only carry untreated 4x4s up to 8 ft.

With the 4x4s securely fastened I mark the location of my first support arm. I’m making it 30” off the ground which will give me plenty of room to store other things on the floor under the kayaks.

I just lined the support arm up with my pencil lines and screwed it into place.

At first, I started with one screw in the middle and two on each side. I went back later and doubled everything up once I had all the support arms in place.

Then, I worked my way up putting 15” of space between each support arm which is plenty of space for my kayaks.

Some of these had a tight enough fit that I needed a mallet to tap them into place which is great. I wanted a nice tight fit.

On average my kayaks weigh about 50 lbs a piece, so each support arm will only be carrying 25 lbs of load on them. These support arms should hold up very well under that load. Just in case I can always add 4x4s to the other end of the support arms for extra support down the road.

One last thing I wanted to add was something to protect the bottom of the kayaks. I bought some cheap black utility mats with rubber backing for this.

I figured the rubber would protect the wood from wet kayaks and the carpeting would be a nice scratch resistant surface to lay on.

They were also super clean to cut with a utility blade.

These were easy to fasten to the support arms with a staple gun. I think they give it a nice finished look.

Alright, the last thing to do here is load her up.

I loaded mine up with the smallest and lighted kayaks at the top. We’re not talking a huge weight difference here but every little bit helps when working above your head. I’m also storing my kayaks upside down. This will prevent any warping from happening on the bottom  and they sit flat upside down making them more stable.

And that’s that! Five Kayaks up and stores out of the way. The great part about this design is that it’s easily scalable. So, if you only have one or two you can easily modify the length of the 4x4s and the number of support arms needed.

Ten Tools You Never Knew About 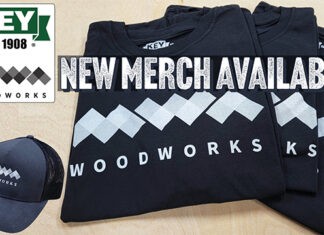 Matt @ MWA Woodworks - May 20, 2021 0
I'm so stoked to announce that I have a new line of logo wear available through Key Apparel!

5 Ways to Improve Your Table Saw